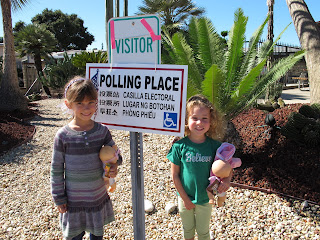 "When do we get to go on the boat?"  asked Alyssa as we headed to our polling location at midday.  Puzzled, both Hannah and I asked her to clarify.  We weren't going on a boat... when did we say anything about riding a boat?  Hannah thinking that she understood what Alyssa was talking about said, "Yes Alyssa, we were on two boat rides at Disneyland..."  But that wasn't it... after a little bit more pondering as Alyssa kept insisting that were were going to a boat, it dawned on mommy... we're going to vote!  I think she was a little bit disappointed that there wasn't going to be a boat ride today. 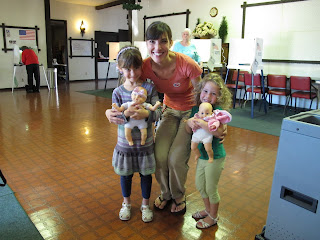 The girls charmed the ladies at the polling place. So much so that when daddy arrived to vote later in the evening (and Hannah gave him the run down on what to expect when her got home from work), he was taken back when the ladies told him how much they enjoyed his family.  He wondered if he was supposed to know them.  We actually went to the polling place twice today.  We returned later in the afternoon to pick up the jacket that Alyssa had left there earlier.