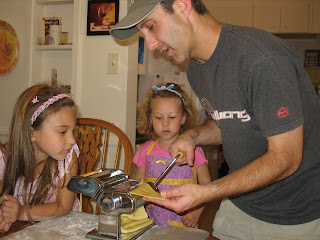 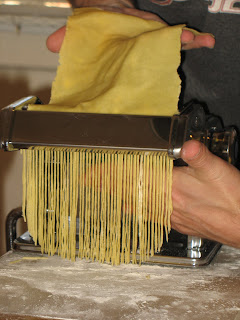 Daddy decided to make fresh pasta with the girls tonight. They had a blast! It was simple... 1 cup flour, 1 cup Semolina flour, 3 eggs room temp, mixed up, then kneaded and cranked through the pasta press a few times. After 2-3 minutes boiling we had a yummy fresh pasta dinner! 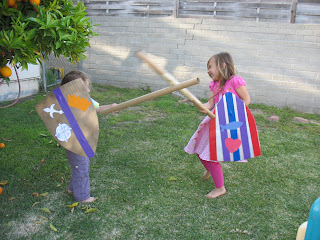 Hannah and Alyssa made shields as a group activity with friends while learning about kings and queens.  At the time, they were not really interested in joining in the battle with the boys.  Today was different.  Armed with wrapping paper core swords, they went to town fighting each other with mommy calling out, "Hit her!  Use your sword to hit her shield 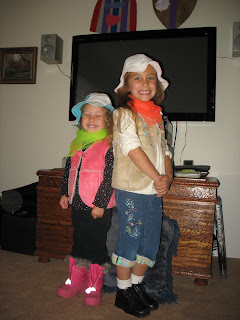 Hannah decided to be a cowgirl today... every time I called to her, she would correct me, "I'm Jessie!"  Of course, Alyssa wanted to be like her sister...
No comments:

Many people did not know that Ryan decided to run the LA Marathon He was really dedicated to his training until three weeks before the race, then work got crazy and he threw me a birthday party and suddenly, race day was here! Ryan finished the race... we are so proud of him! 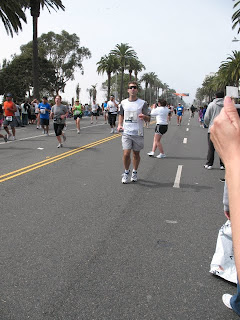 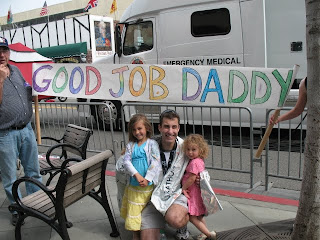 You may or may not know that for New Years 2009 my "little" brothers, Eric and Brett, talked me, Brett's wife Jen, and mom and dad into a family fitness and weight loss competition. It was really for me and dad. It was our game to lose because we were in the worst shape. You see, after ten years of eating Naomi's delicious cooking, eating with her, sympathetically, through two pregnancies, and having candy available at all times of the day at a stressful job for several years, I'd managed to balloon up to over 180 lbs. Now, my 5'6" frame shouldn't be carrying more than about 135-140. I told myself at 168, many years ago, that I'd never see 170 on the scale, then again at 175 that I'd never let it tip 180. Well around Christmas 2008, the highest number I ever saw, lit up at 182. As luck would have it I had just started a new job at Walt Disney Studios in October, and the studio opened a new gym in mid December. So I joined the gym and started eating healthier, well, cut my calorie intake for sure. On days I couldn't make it to the gym I'd go home and run at night. I started off slow and weak, barely able to run half a mile without being winded. As time progressed I got stronger, felt better, and could go farther. By the End of February I was at 175 lbs. A month later I was at 165. By the summer I was in the sub 150s where I am today, maintaining a range from 142-146 on any given day.
I continued the running and by Christmas 2009 I decided to check an item off the ol' bucket list by running the LA Marathon. Eric had run it three times in the past and Brett trained for it one year but was forced out due to injury. 2010 was my year. (I've never considered myself any kind of and athlete compared to my bros, but I felt like this was something I could accomplish, to put my name up on the board with theirs. So I started a distance regimen in January. As Naomi wrote above, I tried, but "life" had some other plans for me.
Physically ready or not, March 21st arrived and I was mentally prepared. Truth be told, I wasn't worried or scared at all. My attitude was, "What's the worst that could happen? I go too slow and get picked up by the draggin' wagon? The race started and though I anticipated a better time than I actually ran, I still finished, and that was good enough for me. You'll understand especially after seeing my video log.
Marathon video coming soon. I recorded a video log at every mile marker. It would have been up already but YouTube has a 10 minute limit, so it'll be a 2 parter. Watch the whole thing. Naomi really started laughing during the second half of the race, when I was dying. Apparently I'm extra funny when I think I'm about to keel over.
Enjoy,
Ryan
1 comment: 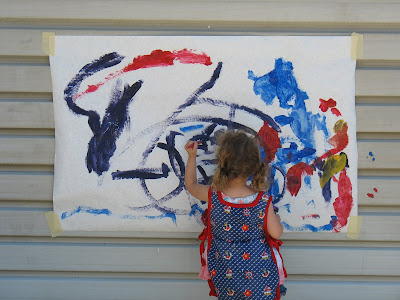 It was amazing to watch Alyssa paint this picture... With wide gestures (and her right hand), she began with the purple paint.  Switching hands, she continued on with the blue, then the red and green... all the while, telling the story of her painting... there was a storm, and water and Ariel saving her prince.  It was quite dramatic, as if watching a performance piece... and boy was she proud of her finished product!
No comments: 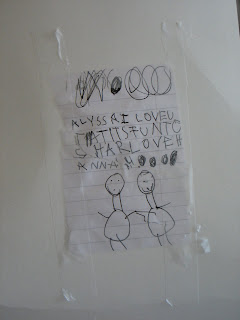 I found this note taped to the closet door where I hang the girl's artwork.  Hannah posted it with Alyssa's artwork.  It says, Alyssa I love you and that it's fun to share.  Love Hannah.
No comments: 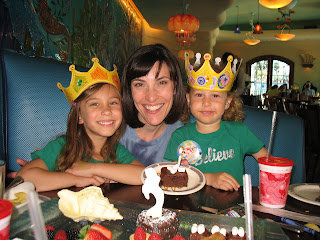 Several months back, when I was updating our wall calendar, Hannah wrote on March 17th: D M B DAY (Disneyland Mommy's B Day). In this family, it isn't your birthday unless you go to Disneyland! Thank you to friend, Joelle for joining us! 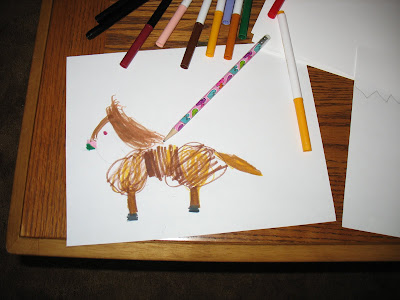 Hannah has been very expressive with her artwork.  She calls herself an artist and can't bear to part with any of her creations.  This picture came as a surprise to mommy.  Where did she learn to draw a horse like this?  Later when I told Ryan about the drawing, he commented that several weeks back... maybe a month, they watched the movie, Spirit. One of the bonus features was to learn how to draw a horse...
No comments:

No one was as surprised as I was! Thank you to my hubby for throwing me a big birthday bash! 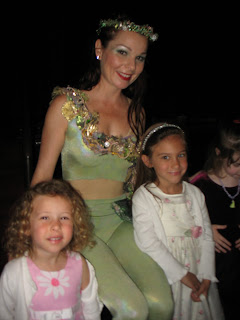 This is our third year going to see the Little Mermaid Ballet by the Inland Pacific Ballet and Alyssa's first time.  It's a beautiful ballet, very kids friendly.  Alyssa was prepped by Hannah to expect the storm scene to be a little bit scary.  Alyssa loved the ballet and recounted the story vividly later that night.  Hannah was thrilled to meet Ariel and was excited to be able to talk to her a little bit after the show. 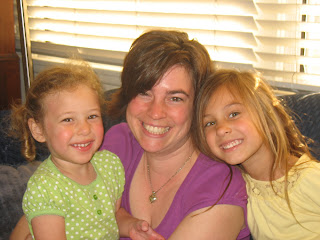 As I was putting Alyssa down for her nap this afternoon, the doorbell rings.  That's quite unusual, but even more odd was that as I went to the door, through our blinds, I could see Grampop standing in the driveway... Hmmm, maybe Grandma had to pick up something for my party tomorrow, I thought... but no, instead, there was my sister, all the way from Tampa, FL, standing there at my door step!  It was great to see her!  While Alyssa napped (and she did nap even with Aunt Becky here!) Hannah got to spend some on on one time with Aunt Becky at the park.  Then after dinner, we watched the movie, Penelope while eating popcorn.  Life is good!
No comments: 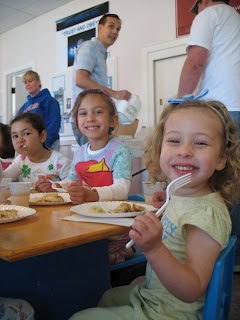 Hannah's last pajama and pancake breakfast at preschool!  Times flies!  Alyssa joined Hannah's class for circle time and pancakes too.  Next year is will be Alyssa's turn to wear her pajamas to the pancake breakfast.
Click here for pictures
No comments: 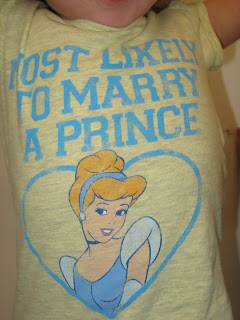 Today LuLu was wearing one of her favorite hand me downs from Sissy.  It is a t-shirt that says, MOST LIKELY TO MARRY A PRINCE with a picture of Cinderella underneath it.  She was "reading" the words on her shirt, tracking them with them with her fingers.  "So are you going to marry a prince one day?" I ask.."Yes, Daddy, " was her matter of fact reply.  So sweet!  And before I could savor the moment of the innocence of the love a little girl has for her daddy, Sissy pipes up, "No, he will be using a cane..." Really? I think.  "Or maybe even be dead."

Side note:  Daddy found a plastic pink ring that needed to be put away one day and gave it to Alyssa.  Now she wears it on her ring finger and says, "Daddy married me."
No comments:

It's about ten minutes past 6 am and I hear Hannah's voice call out, almost in a panic, "Daaa-dee!  Daaa-dee!"  In the moment it takes me to decide to jump out of bed I think, 'You've got to be kidding me... Alyssa has been lying on our bedroom floor since 5am sucking her thumb really loud and I've had to listen to Ryan push snooze on his clock for the last 45 minutes.'  Throwing back the covers, I rush out to stop her from yelling once more.  Sitting on the floor, I find her with the front door wide open, hurrying to put her black dress shoes on so that she can say good-bye to her daddy...  "Hannah," I try not to sound too annoyed, "Daddy hasn't even gotten into the shower yet..."

The girls get all bent out of shape when they don't get a proper good-bye from their daddy in the mornings.  Finding them throwing open the door as daddy gets into his car is not unusual.
No comments: 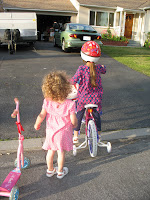 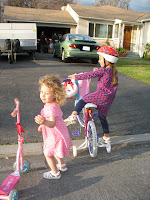 On our walk today, we finally got to hear the neighborhood garage band practice.  These kids hold a concert every six months or so, they hand out fliers so that everyone knows about it... parent supervised.. no alcohol, etc.  Alyssa right away made sure she had enough room to dance to the music.  Sorry I didn't get a good picture of the band...
No comments: