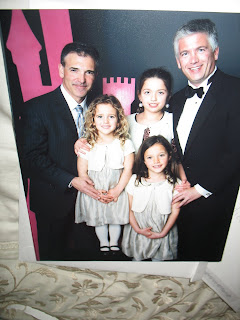 Since May, we have been trying to work with the photographer who took pictures at the February Father Daughter Dance. There was some confusion with our mailing address and the fact that we had moved, but also, Ryan had wanted to know which pictures they would be sending. Uncle Brett, who attended the dance with them had been in one of the pictures and we were willing to buy additional pictures to have one with him, but was not told how that would happen. It was four months of poor communication on the part of the photographer and frustration for Ryan. Finally, we received an unmarked envelope in the mail. As Ryan opened the envelope, he hoped that what he saw was a joke, but alas, it was not... pictures had finally arrived, but it was not of our family!
No comments:

We have been with smokey skies for a week now. Some days we see nothing but gray and others the sky is blue as can be with big poofs of smoked formed clouds. At times, the smell of burning wood and brush is intense and then not at all, but we know that the air quality is terrible, so we try not to be outside as much as possible. Ash is often found floating gently in the air. And it's been so hot out, that being inside isn't so bad... though the girls are getting a bit stir crazy! 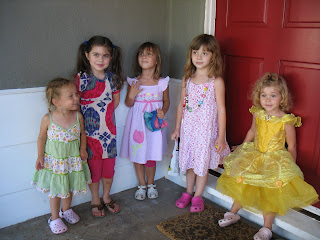 When Hannah was still in mommy's tummy, we started a friendship for her with two other little girls who were still in their mommy's tummies. Now Hannah, Ava and Francesca are 4 and they all have little sisters of their own. In between making banana bread and their own little pizzas, there was a lot of running around, giggling and general mayhem this day when we finally got all our girls together for the first time in several years!

This was a fun night... the girls love to dance and as soon as the music started, they were on their feet. They also had a fun time climbing the little tree at the edge of the open area. At first, Hannah wanted help, but it didn't take her long to be comfortable just hanging out in the tree. Alyssa made friends with a little girl named Hannah who wanted to share all her toys and food with her. The "highlight" of the evening was when Alyssa threw up on mommy's face... Mommy flipped Alyssa over one too many times! Thankfully that happened at the end of the evening... 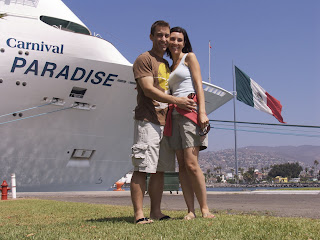 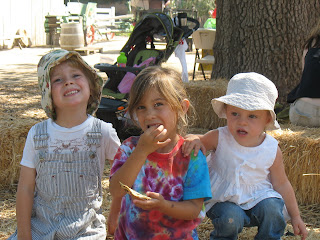 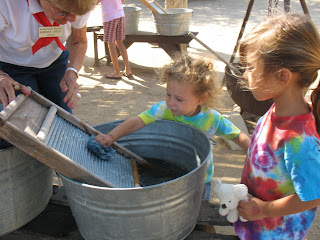 Leonis Adobe Museum is an 1800's ranch that holds summer activities for the kiddos. There they can feed various farm animals, make tortillas and learn what ranch life was like back then. They also do story time, crafts and music too. We've been going every summer and the girls have so much fun... though Alyssa is still a bit cautious around the farm animals since her chicken scare earlier this year.
No comments: 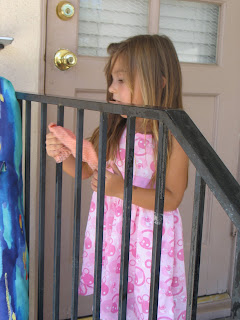 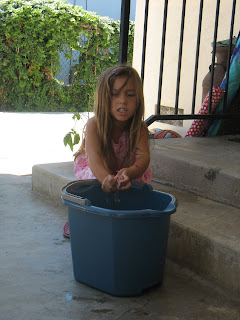 Every once in awhile, my little Hannah refers to me as "Step Mother." I have to admit, the first few times I cringed! But now, when I am told to, "Go do something else, Step Mother." I happily pick up a magazine and let Hannah finish cleaning the floors, the chairs, the outside of the backdoor, whatever it is she wants to clean and sit back and watch. And how could I forget to mention the songs that she belts out as she cleans!
No comments: