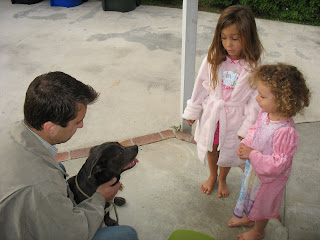 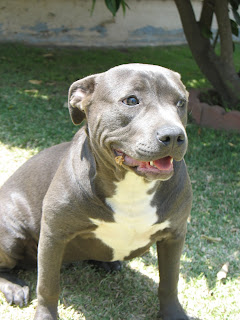 As Ryan opened the front door to head out for work this morning, he found this dog lying right up against our screen door.  She sat up a few times to bark at a bird or passerby from her perch, but chased no one down.  It took a little coaxing to get the rope-made leash around her neck, but Ryan is patient and quickly gained her trust and into the backyard she went.  She is really sweet and gentle and we figure she must be from a family who loves her.  Our next door neighbor has a dog, so instead of the proverbial cup of sugar, we asked for a cup (or two) of dog food, which "Isabella" quickly scarfed up.  Hannah has already named her Isabella.  There's talk by the girls of moving so that we can take Isabella with us... they are quite aware that our lease doesn't allow for pets.  Instead, we'll be off to the vet to see if she has a microchip so that we can try to find the owner... and a walk around the neighborhood to post up signs.
UPDATE: Naomi wrote the original post. I, Ryan, am going give you my version and then tell you how it all turned out.
Hannah ran to open the front door for me to leave for work this morning. I was about ten steps behind her as she swung it open and turned back toward me. So she didn't immediately see what made me jump. There a foot and a half from my 5 year old daughter was a startled, pure-bred pit bull, with nothing but a screen door between them. After we all took a beat to assess the situation she didn't seem too threatened or threatening and she sat there with all of her 35 to 40 pounds fully pressed against the screen door. Hannah loves dogs, has no fear of them, and is sooooo trusting. She knelt an extended a closed hand for the dog to sniff. The beautiful but collarless pooch sat up straighter and stuck her massive snout as far as she could through the metal grate at the bottom of the door to get her nose on that hand. Alyssa soon joined us and our new friend twisted her body and pressed her powerful, muscled body even harder on the door. Nervous dad, I wouldn't let the girls open the screen but that also meant I couldn't get out and I was now looking at the clock, realizing how late it was getting. When Naomi arrived to the living room we had a quick discussion and decided to TRY to pen the pit bull up in our back yard and find it's real home later in the day.
I grabbed a rope from the garage and fashioned a crude leash. With a considerable amount of effort and time I inched her back off the door mat enough to squeeze myself out onto the porch with her. On my knees, moving slowly, I gingerly slipped the loop over her head. Much easier than I expected. I stood and gave a slight tug to head down the steps. I got a "slight" tug back as she shifted her weight and pulled against me. A tough task I thought. I let some slack out and just started walking. Before I knew it she was at my side literally rubbing against my leg with each step as I led her through the gate into the back yard.
Naomi brought some water out to her which she ignored, but while I had her on the leash we let the girls come out to meet her up close. Immediate bonding between all three. 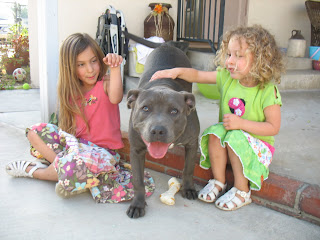 Here's the UPDATE:
While out posting "found dog" fliers in the neighborhood, Naomi came across a "lost pit bull" sign. She called the number to discover that our new friend, Abby, had been missing from her real home since early this morning. Turns out she lives just around the corner.  Abby's owner was so happy she was safe that he gave Hannah and Alyssa a reward for taking such good care of his 6 mo. old pup. A happy end for everyone, and we can go visit Abby whenever we want.